With the Heavyweight Championship belt on the line, this Death Clutch shirt was worn by Brock Lesnar for his UFC 100 fight against Frank Mir (featured below). Show your support by wearing Brock Lesnar’s UFC 100 walk out tee by Death Clutch!

Frank Mir‘s UFC 100 walk out shirt was worn before his fight against UFC Heavyweight Champ Brock Lesnar (above). Support Frank Mir by wearing his Ecko Unltd. walk out tee!

Michael Bisping wore a walk out shirt designed by his one and only, Ecko Unltd. With grafic designs and a dark mineral wash, going head to head with offender Dan Henderson looked even more intense. Support Michael Bisping by wearing his UFC 100 walk out shirt, available above! 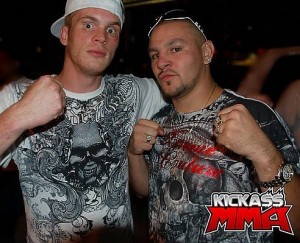 Mixing fashion with passion, MMA clothing is the way to go both at a fight and out on the town. Now that you’ve browsed the most popular UFC 100 walk out shirts, it’s time to get decked out in the latest MMA clothing and apparel!

Visit our Kick Ass MMA Directory to find out even more about the latest MMA  fights, fighters, gear and girls!