The largest Crowd in UFC History gathered at the Rogers Centre in Toronto on April 30, 2011 for UFC 129.  The adrenaline was rushing as the fighters approached the ring in their fighting gear. Now you can get the look of a MMA Ultimate Fighter as well.  Here’s a look at the UFC 129 walkout shirts and fight gear worn by the main  fighters including Georges St-Pierre, Jake Shields, Mark Hominick and Jose Aldo.

Check out the latest Fight Trends.

This pound for pound Canadian Fighter was seen wearing this affliction shirt for his walkout gear and now you can get the look as well by clicking here. 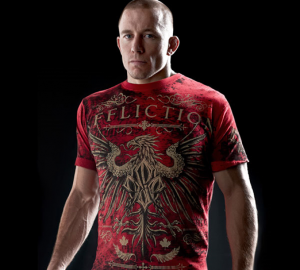 The Jake Shields TapouT UFC 129 walkout shirt features an all-over print design in grey and includes a TapouT seal with blue foil accents on the front and back bordered by the mottos “To Quit Does Not Exist” and “Simply Believe”. 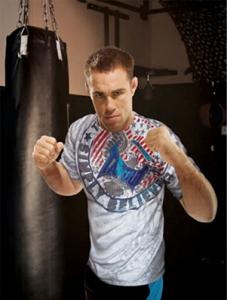 The Jose Aldo UFC 129 walkout shirt features a large ‘Aldo Storm’ graphic on the front that includes a samurai and lighting under a Dethrone logo, while the back and sleeve feature small Dethrone and Jose Aldo logos.

This HEADRUSH t-shirt comes in black and has a Canada theme running throughout with a large “CA” on the front. 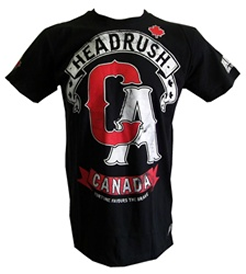 Lyoto’s fight shorts come in either black or white and have the Venum snake head logo on both legs, with one of them done up in a Brazilian flag design

Randy’s walkout tee comes in black, red or army green. It has that standard Xtreme Couture,  with the XC logo on the front, an iron eagle design, and some tribal in the background.