Mark your calendars and set your plans to attend MCC 15: Lights Out! this Friday, July 24. Ten pro mixed martial arts (MMA) bouts include an exciting light weight fight between Paul Bird and Bryce Teager that determines who leaves with the vacant MCC title belt. 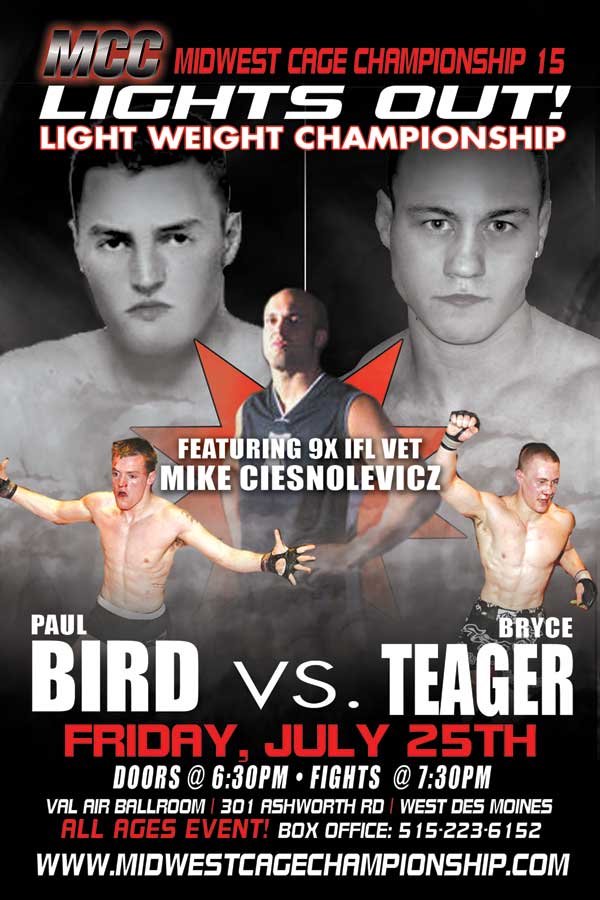 Friday’s MCC 15 event will be filmed and broadcast in its entirety on later dates on Mediacom Connections Channel 22. Highlights of the event will be featured on HD-Nets Inside MMA weekly news and talk program. MCC’s own Scott Casber will guest co-host an upcoming Inside MMA episode when he’s joined by special guest UFC World Champion Georges St. Pierre.

HD-Net is an MCC sponsor and the organizations are providing a very special offer to those attending MCC 15. Fans are able to enter a contest to win a great prize package that includes a pair of MMA gloves signed by Inside MMA host and fight icon Bas Ruten. Attendees must simply text a code found in the HD-Net program. Additionally, special awards will be presented to the evenings best fighters by the Iowa National Guard and Polanti Watches.

Tickets for MCC 15 are available at the Val Air box office, at MidwestCageChampionship.com, ticketmaster.com and also be sure to check out Cheap MMA Tickets. VIP tables can be purchased by calling (515) 229-8566.