Kimbo Slice (aka Kevin Ferguson) is relatively new to professional MMA fighting. But, his notoriety spread long before he stepped into the Octagon. Slice had gained a following by being featured in a number of unsanctioned, underground street fights that were filmed and distributed online. He became an overnight sensation. In July 2006, Rolling Stone magazine called Slice “The King of the Web Brawlers.” Fans from around the world already knew him and had witnessed his fierce intensity by the time he entered the cage for an MMA bout.

After ELiteXC operations collapsed, president of the UFC Dana White offered Kimbo a chance to compete in the UFC.  White stated that if Kimbo Slice wants to compete in the UFC, then he would have to earn his contract by competing in the Ultimate Fighter season 10: Heavyweights TV show. Slice accepted the offer and is preparing for the TV hit series that will be coached by former UFC light heavyweight champions Quinton “Rampage” Jackson and Rashad Evans.

In Kimbo’s next fight he was scheduled to fight UFC legend Ken Shamrock in October of 2008 for CBS’ Saturday Night Fights. Just prior to the start of the fight, Shamrock cut his left eye open during his warm-up, forcing Shamrock to back out of the fight. The replacement fighter that was chosen for the fight was Seth Petruzelli, an experienced MMA fighter. Slice agreed to take on the new opponent after recieving an increase in pay, Kimbo was given $500,000 for his efforts. Petruzelli stunned Kimbo in the opening round and, after only 14 seconds into the first round, Petruzelli defeated Slice by TKO.

Inorder for Kimbo Slice to make the transition to MMA fighting, he

trained with Bas Rutten, a retired MMA fighter and Randy Khatami in Rutten’s EliteMMA camp in California. In 2007, Slice stepped into the cage for his first professional fight in Cage Fury Fighting Championship 5 in Atlantic City. Kimbo submitted his opponent, Ray Mercer (a WBO Heavyweight boxing champion), with a guillotine choke during the first round. It was a promising start. After his victory, Kimbo called out MMA fighter David ‘Tank’ Abbott, who was in attendance for Kimbo’s fight. Tank Abbott stood up in the stands and accepted Kimbo’s challenge.  The fight between Kimbo and Tank was scheduled for October 12, 2007 at Cage Fury Fighting Championships 6, but was later moved back because of a promotional dispute.  Later in the year, Slice signed a contract with the ProElite fighting organization. His first ProElite fight was against Bo Cantrell. Spectators watched, stunned, as Cantrell was beaten into submission within 19 seconds of the first round.

Slice’s next bout took place on February 16, 2008 against David Abbott in the main event at EliteXC: Street Certified. Both MMA Fighters entered the Octagon and within 43 seconds of the opening bell, Slice had delivered a stunning rain of blows that knocked Abbott out.

In May of 2008, Kimbo Slice fought in the main event of the first ever MMA event aired on prime time network television, EliteXC: Primetime. Kimbo was set to square off with James Thompson. Judges for the bout had Kimbo losing the fight through the first two rounds. The tables turned for Kimbo in the opening seconds of the third round, when Slice delivered a crushing haymaker to Thompson’s left ear, which ruptured the fighter’s cauliflower. The haymaker was followed up by three unanswered punches to a standing Thompson, which forced the referee to stop the fight and award Kimbo with a TKO.

Kimbo began working as bouncer for a strip club but that didn’t last long. Before starting his MMA career, Slice also worked for a short time as a bodyguard. An old highschool friend and Kimbo’s current manager offered him a job as  bodyguard for RealityKings, a pornography production/promotion company based in Miami. He protected employees of the company one of the websites profiled videos (originally produced for YouTube) that showed him tackling people for money. Kimbo still maintains close ties with RealityKings, who act as his fight entourage under the name Team Kimbo.

Kimbo Slice was charged for carrying a concealed weapon in 2002 and in 2003, he started his career in unsanctioned street fights. These street fighting videos were distributed via the internet mainly on YouTube and adult website SublimeDirectory. Kimbo fought a man named ‘Big D’ in his first ever street fight and he left a large cut on his opponent’s right eye which led Internet fans to call him Slice, making the nickname ‘Kimbo Slice’ official. The only street fight Kimbo lost came from a man by the name Sean Gannon, who was a former Boston police officer and MMA trainer. The fight made both men immensely popular and propelled both men into the MMA spotlight.

Kimbo in the Early Days

Kimbo Slice was born in Nassau, Bahamas, but shortly after moved to the United States. He grew up in Cutler Ridge, Florida, and was   raised alongside his two brothers by a single mother   named Rosemary Clarke.  Kimbo attended Bel-Air Elementary School and at 13 years old, he got in his first fight, when he tried to defend a friend. He stayed at Cutler Ridge Middle School and later he transferred to Richmond Heights Middle School.  He went to high school at Miami Palmetto High School, where he was the football team’s star middle linebacker.  Kimbo’s house in Perrine, Florida was destroyed by Hurricane Andrew  in 1992 but  he continued living in his 1987 Nissan Pathfinder for about a  month.

Kimbo attended college at  Bethune-Cookman University and then later at University of Miami, where he had earned an athletic scholarship and was a student in the criminal justice department. He didn’t stay at Miami long because in 1997 he tried out for the Miami Dolphins and made the pre-season squad, but he never made it to the first team roster. Kimbo Slice is rumored to have served 10 years in prison. Kevin Ferguson is also the cousin of US Judoka Rhadi Ferguson.

Kevin Ferguson lives with his family in Miami, where he is a single father to three boys and three girls. The boys names are Kevin Jr., Kevin II, and Kevlar. Kimbo’s girls names are Kassandra, Kiara, and Kevina. He is engaged to his girlfriend, Antionette Ray. Kimbo starred on TV show: The Iron Ring airing on BET which features up and coming MMA fighters. Slcie made his acting career official, when he played a part on Merry Christmas, Drake & Josh, a Nickelodeon holiday special. 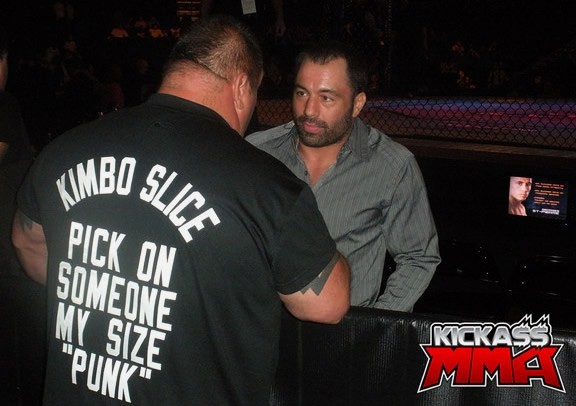